We offer cake decorating and baking supplies for the home hobbyist to professional.

We are the first-of-its-kind cake decorating supplier in Malaysia that offers a wide-range of Wilton cake decorating products and tools, as well as wedding and candy making accessories. 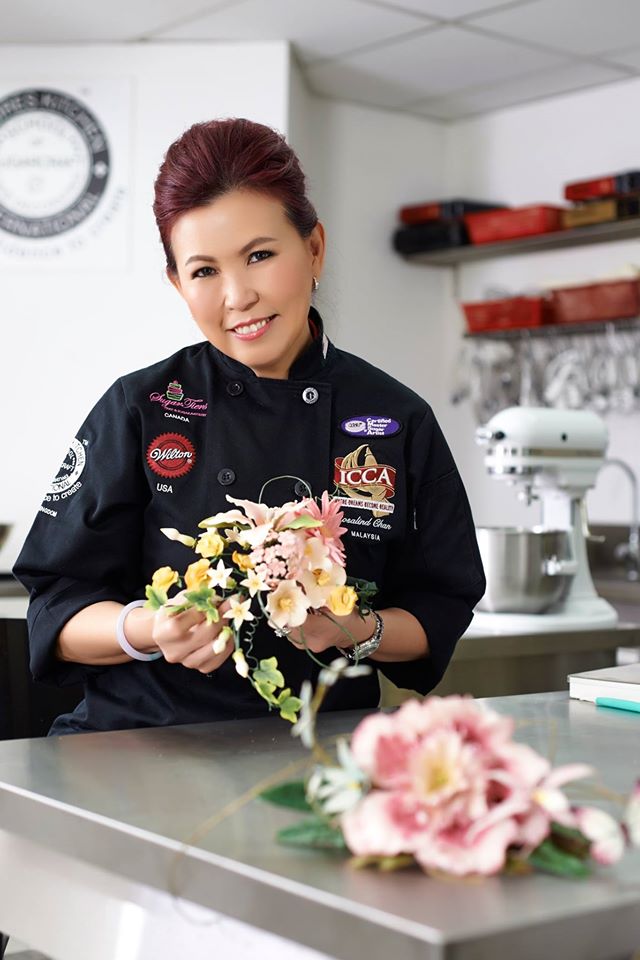 Rosalind Chan is a cutting-edge cake designer and international instructor who are setting new standards in both Canada and in Malaysia for wedding cake style and design as well as in the classes that she conducts on cake decorating. Her cakes and sugarpaste flowers are edible sculptures both in originality and creativity. From the time she started holding a piping bag and began decorating her first wedding cake, her cakes have been wowed. Whimsical, captivating and meticulously designed, her cakes demand attention because of their beauty and uniqueness. They are centerpieces in every sense of the word.Many people are often very curious about Rosalind’s background and how she came to be what she is today. One could say that baking and designing “is in her blood”. She grew up amidst beautifully decorated birthday cakes that her mother, her mentor till today, baked and created. At a very tender age, Rosalind was drawn to baking and coupled with a keen eye for detail and colour, she aspired to pursue her childhood interest when she grew up.

Rosalind never forgot her childhood dream when she furthered her studies abroad. When she took up business and law studies in Britain and then, a BA from the American University of Sarasota through an affiliated British night school, she continued with her hobby and learnt the finer arts of cake decorating from top British cake designers and decorators. She immigrated to Canada in 2001 after leaving Britain and continued to pursue her childhood passion in her spare time.

In the summer of 2010, she gained the additional status of "Certified Sugar Artist" and then in 2011, she gained the highest status of "Certified Master Sugar Artist" from the International Cake Exploration Societe in the USA, making her the first Asian Canadian to achieve this status in the cake decorating industry. Most recently she was inducted into the President’s Club at Wilton USA, which is the second highest recognition or level in the Wilton Hall of Fame. She has conducted countless cake-decorating courses for people from various walks of lives ranging from homemakers and professionals to pastry chefs in countries such as Canada (Toronto), Japan (Tokyo), China (Shanghai, Harbin and Guangzhou), Singapore and Malaysia (Ipoh, Penang and Kuala Lumpur).

She has appeared on Canadian and Malaysian radio and television, newspapers and numerous business and lifestyle magazines and is a member of solid standing with the British Sugarcraft Guild, Canadian Society of Sugar Artistry, Canadian Pastry Chefs Guild as well as a regular demonstrator and local representative for Malaysia and Singapore for the International Cake Exploration Society in the United States. She has also won numerous cake competition awards, international judge and adjudicator and has demonstrated at many local events in North America.

During her time in Paris, she also worked as an intern at the famous Pastry Kitchen of the Ritz Hotel. She is also a project contributor to the popular Pastry & Baking Magazine which is circulated worldwide. Besides cake decorating, Rosalind often finds ways to contribute back to the society. Her schools in Malaysia offers full cake decorating scholarships to students who have a passion for the art but are unable to pursue due to financial situations and commitments. Not only does she believe in just offering scholarships, she also contributes to charity events every year in Malaysia e.g. old folk’s homes, shelters and orphanages. In her outlet in Markham, Ontario, she regularly contributes to charitable training programs. Even though Rosalind now resides permanently with her family in Ontario, Canada, she regularly travels back on business to Asia.

Rosalind has furthered her passion with her debut entrepreneurial venture with the opening of the first ever authorized and certified Wilton Method Instruction Training Centre in Petaling Jaya, Malaysia in 2006 followed by a second outlet in 2007 at Sri Hartamas, Malaysia. Both training centres have a one of a kind retail outlet catering solely to this industry, offering the most up-to-date cake decorating materials and tools sourced internationally. Recently, in December 2008, Rosalind opened her third and largest cake decorating cum baking/training center and retail outlet in Malaysia spanning over 16,000 sq. ft over 4 floors. This 16,000 sq. ft. site offers state of the art training facilities in terms of equipment and visual aids. Her facility also offers the first ever one of its kind wedding consultation facility in Malaysia in that it offers the bride to be an opportunity to see a full visual image of the wedding cake of their dreams using computer assisted technology. In 2008, her centre in Malaysia, International Centre of Cake Artistry received the “Rising Star Award” from Wilton Industries (USA).

In 2010, her centre in Malaysia was inducted into the Distributor’s Hall of Fame in USA for their commitment to the Wilton Cake Decorating program in Asia. Her retail outlets are now the sole distributor for Wilton (USA), FMM (UK) and Squires Kitchen (UK), Alan Silverwood (UK) and Beaterblades (USA) products for Malaysia. Her entrepreneurship does not end in Malaysia. In March, 2010, Rosalind opened her newest outlet and training centre in Markham, Ontario, Canada called SugarTiers Inc. This will be the first one stop cake decorating and baking centre of its kind in Toronto. The outlet will have a vast range of cake decorating and baking equipment and tools sourced internationally for sale, an in-house and take out bakery catering to creating customized celebration cakes and dainty French pastries and a training centre that offers basic to advanced cake decorating and baking courses. Her cupcakes were highlighted in a write up in the Toronto Star. As well, her wedding cakes are featured in episodes of the Canadian wedding reality shows, “In Law Wedding Wars” and “Four Weddings” on the Canadian Television Network “Slice”. You can also check her out on Cake Walk – A Wedding Cake Edition – Episode 8 (Fright Night) on the Slice Network. Recently she was interviewed and had a write up in the “Metro News”, a local newspaper in Toronto, Omni TV and York Region TV channel.

She was also asked to be a judge at the 2011 Canadian Good Food Festival together with no other than Food Network’s Celebrity Star, Duff Goldman of Ace of Cakes. She also met up with Buddy of Food Network’s Cake Boss in Toronto during his recent tour to Canada.

Rosalind was recently asked to be the first Asian cake decorator/spokesperson for Satin Ice, a USA based international sugarpaste/fondant manufacturer who boasts famous celebrity cake decorators as their spokespersons in the USA eg. Buddy of Cake Boss, Ron Ben Israel, Anne Heap and Elisa Strauss.